skip to main | skip to sidebar

The wheels that led in the end to the publication of the present book were set in motion some twenty-five years ago, at a conference of the International Organization of Vine and Wine, known as O.I.V., which was held in Italy and was on the subject of protecting ‘Designations of Origin’ of wines. In the international wine trade, this term means the name of a legally demarcated geographical region which is permitted to be written on the label of bottled wines only when the content of the bottle comes from vineyards in the said region and has been made in wineries located within its boundaries.
At this conference, the Greek delegation was in for an unpleasant surprise. Written on the label of white dry wines of an Italian region was the indication Malvasia di Candia. We protested immediately, because this indication is a blatant breach of the European Union Wine legislation protecting geographical Designations, as it misleads consumers as to the provenance of the product. It is indeed well known that the Venetians called Malvasia the Byzantine Castle-Town of Monemvasia, while Crete was for them the ‘Regno di Candia’.

It is also well known that the Byzantine Monemvasian wine, the monovas(i)á of the Greek-speakers, was named by the Venetians malvasia, because in those years, on the routes of maritime trade, merchandise took the name of the harbour of loading. The type of this sweet white wine was imitated then in many regions of Western Europe, where various malvasias in name continue to be made, such
as in Italy the Malvasia delle Lipari, as well as in other countries, such as the Malvasia of Madeira. This has been so for centuries and cannot be changed. But Malvasia di Candia was a Cretan wine which dominated the markets from the fourteenth to the seventeenth century; misappropriation is not allowed.

The Italians’ rebuttal to our protests was that Malvasia di Candia is not a brand name but a grape variety, which is written with this name in the national list of cultivars of Italy, to which cuttings of it were imported from Crete during the sixteenth century, the period of Venetian rule on the island.

As head of the Greek Wine Institute, a research foundation of the then Ministry of Agriculture, and therefore responsible for drafting recommendations to the committee for recognition and protection of Designations of Origin of Greek wines, I set myself at that very moment two goals:
The first was to abolish the writing of place names in the case of grape varieties with composite name. This goal was achieved in 2002. With new EU legislation no grape variety whose name includes a place name can be written on the label of wines that do not come from the region which is denoted by the specific place name. Consequently, on the labels of the Italian wines the grape variety Malvasia di Candia can only be written as malvasia. The only region in which the full name Malvasia di Candia can be used is Crete.

The second goal was more ambitious; it foresaw the revival of malvasia wines in those Greek regions where the historical prerequisites existed. When I considered that the time was ripe for launching this effort, I published in 1996, in the daily newspaper Kathimerini – in the Sunday edition, for which I wrote the ‘Wine Column’ – four related articles. The response of scientists and winemakers was immediate, as described by historian Ilias Anagnostakis, doyen of Byzantine wine, in the introduction
to the Proceedings of the Conference Μονεμβάσιος Οἶνος-Μονοβασ(ι)ά-Malvasia (Monemvásios Wine-Monovas(i)á-Malvasia), which was organized jointly in May 2006 by the Byzantine Research Centre of the National Hellenic Research Foundation and the scientific team of Οἶνον ἱστορῶ (Oinon istoro).

The volume of these Proceedings, which were published in 2008 edited by Ilias Anagnostakis, comprises two parts: In the first part are the conference papers and in the second is my treatise entitled Μονοβασ(ι)ά-Malvasia, πολύπτυχο οινικών θεμάτων (Monovas(i)á-Malvasia, polyptych of wine issues). As Anagnostakis writes: ‘Thus is established the necessary collaboration and cohabitation of different branches, of theoretical and exact sciences’.

Alongside this Conference, the National Hellenic Research Foundation, ‘Taking into account the public’s continually growing interest in the par excellence Greek product, wine’, included in the programme for the period 2005-2006 the thematic cycle: ‘Wine: culture and society. Yesterday and Today’. When I was invited as one of the speakers, I considered that the time had come to put my
cards on the table. On 23 May 2006, in the NHRF amphitheatre, which was packed with interested producers and responsible agencies, I presented the subject: ‘Possibilities of legislative regulation of wines Monemvasía and Malvasia’. The text of the lecture was sent to the Ministry of Agriculture and to the central services of the agencies.

In October 2009, the Presidential Decree recognizing the wine Designation of Origin Monemvasia–Malvasia and demarcating the geographical zone of its production in the hinterland of Monemvasia, was published in the Official Gazette. This was followed in July 2010, by the Ministerial Decision stipulating the terms that must be met by the vineyards and by the wines of the delimited zone for them to be traded with this historic toponym.

In December 2011, the wines Malvasia of Paros, Malvasia of Χάνδακας-Candia and Malvasia of Siteia were legislated. Thus was revived the renowned wine of  the historical triangle of its geographical origin: Monemvasia – Crete – Cycladic islands, the wine that dominated the markets from Byzantine times until the fall of Candia to the Ottoman Turks in the seventeenth century.

In 2017, it was proposed that I write a book which would help the Greek agents of production to promote in the markets the unknown history of this famous wine and its revival in the Greek regions that were its birthplace. The main part of this book is devoted exclusively to issues of vine and wine from the twelfth to the seventeenth century, as these are recorded in the sources I have studied. It is
based on the introduction and the text which were published in the second part of the Proceedings of the Conference Monemvásios Wine-Monovas(i)á-Malvasia, restructured and updated with much new evidence, and accompanied by two Appendices.

The first Appendix is a relatively brief history of Monemvasia, a timeline in combination with references to some geographical names of the peninsula of  Μαλεβός (Malevos), which was the Medieval name of Parnon, and from which the name Μαλεβαζία-Mal(e)vasia of the castle-Town derives. The second Appendix refers to the four contemporary Greek Malvasia wines.

Having made these points, I am pleased to hand this book over to the judgement of its readers. Its writing is the outcome of study and the fruit of efforts which have been ongoing for a quarter of a century. 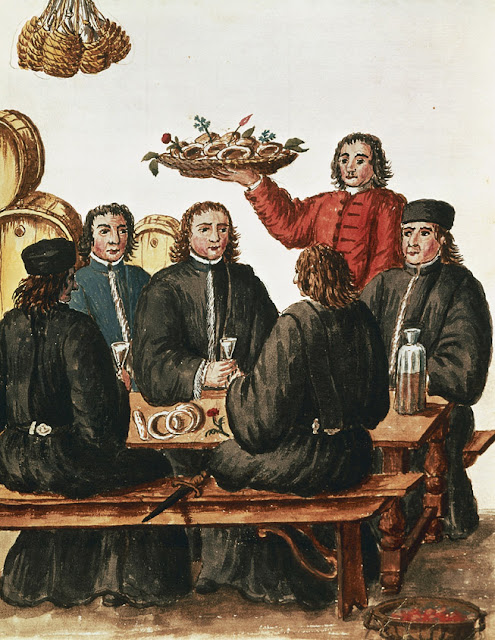 It was mandatory for merchants of Venice to be members of guilds.
The print by Giovanni Grevenbroch (18th century) depicts a repast
of syndics of the Guild of malvasia wine merchants.
Venice, Museo Correr, Cabinetto di Stampe e Disegni.